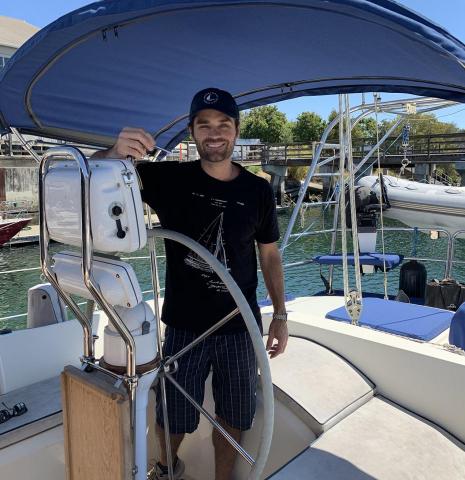 Scott Corder's affinity for the ocean began in his youth with surfing and scuba diving. A diving charter aboard a sailboat with a friend in the tropics ignited his interest in sailing and inspired him to join Modern Sailing in July 2017. That September, he completed ASA 101, Basic Keelboat Sailing and went on to become a very active student and club member.

In 2018, Scott continued his sailing education and completed ASA 103, Basic Coastal Cruising, ASA 104, Bareboat Chartering, and the Recreational Race Clinic. He rapidly advanced his skills by sailing in 15 races, including the Leukemia Cup Regatta. 2019 was another a very big year for Scott, with completion of ASA 105, Coastal Navigation, ASA 106, Advanced Coastal Cruising, ASA 107, Celestial Navigation, ASA 114, Cruising Catamaran, the Electronic Piloting and Radar Clinic, a Half Moon Bay Expedition, and 8 races. As a result of his dedication to his sailing education, Scott received MSC's 2019 Top Student Award!

In 2020, Scott's passion for sailing took on increasing energy. He purchased his first sailboat, a 2007 Tayana 48 DS named Seahorse, and recently began living aboard full-time. Scott and his boat are ready to sail to Mexico - he only needs to find two or three good crew members to join him for the journey. (If you are interested in crewing with Scott to Mexico, please contact us and we will get you connected.)

It has been rewarding for MSC staff and instructors to assist and witness Scott's remarkable progress as he sailed full circle from novice student to experienced skipper and boat owner in only three short years. Congratulations, Scott!

Scott Corder and his Dad on Celebration Sail aboard Seahorse.jpeg

Scott and his father enjoying a celebration sail together on Seahorse.

Do you dream of sailing adventures near or far? Modern Sailing School & Club can help you get prepared to go with confidence. Your journey can begin with an email or a phone call to our friendly office at (415) 331-8250.