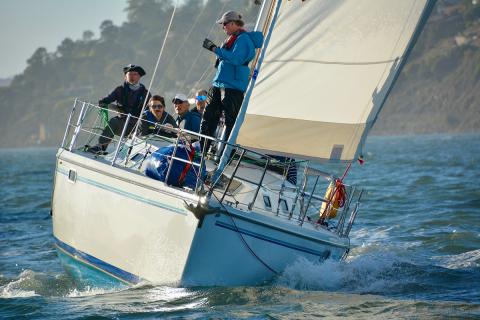 With Team Kele capturing first place in their division on May 4 and three MSC boats enjoying some fun and friendly competition in the May 14 CYC race, the spring racing season is off to a fantastic start!

On Tuesday, May 4, two MSC boats, Phoenix and Kele participated in the first of the SYC Spring Sunset Series races.

Racers enjoyed good wind for the duration and all were able to cross the finish line on time. Phoenix took a flyer to the right that didn’t pay off and finished fourth. It was a different story for Team Kele, who took first place!

A learning opportunity and a good read: Captain Stephan Sonnenschein describes the action from start to finish, including the special challenges that made this race fun, exciting, and sometimes... confusing!

At the start of the May 18 SYC race, racers knew they were in for a challenge when they noticed winds were beginning to decrease. Team Kele (coached by Cpt Mark Jordan) and Team Phoenix (coached by Cpt Katie Cornetta) enjoyed a steady first lap up to Yellow Bluff and back down to Fort Knox, but on the second windward leg, the wind began to die off even more. As the teams fought hard to get to the top mark, the breeze eventually filled in a bit again. Kele and Phoenix passed each other and traded places several times. With Phoenix and Kele both flying spinnakers, Phoenix just barely finished ahead with a masterfully executed spinnaker jibe right at the finish.

As we maneuvered in the prestart area, the wind was up over 20 knots at the start of the race. We were struggling with helm balance, so in the final minutes before starting, I made the decision to take in the first reef in the mainsail, something I rarely do when racing. Even though it can help on the upwind leg, the reduced sail area can lead to being slow during the downwind legs of the race, and it's hard to shake out the reef once off the wind. In this case, however, reefing turned out to be the right call, as the yachts which went with full sails were visibly struggling to keep from rounding up at the start and during the beat to the windward mark.

Team Kele got off to a textbook start. Our reach-out, reach-in strategy worked out as planned, as we timed our final tack back to the line just right, and ended up on the perfect layline to the favored committee boat end of the line, just to leeward of our nearest competitor. Since there is no mark room owed at the start, we were able to use our favorable position to squeeze out that windward competitor, forcing them to tack over to port and circle behind all the other boats, making them the last to cross the starting line for our division, just behind team Phoenix.

Having won the start, the next challenge was deciding on our tactics for dealing with the strong flood current on our way to the weather mark at Blackaller buoy. We strongly considered tacking over to port and sailing up towards Cavallo Point in a bid to avoid the worst of the flood in the slot, and indeed we watched the competitors behind us do exactly that. I called "prepare to tack" and the crew took their places. But in the moments leading up to that tack, I couldn't shake my feeling that the ebb was probably starting along the cityfront, and if we could just get across the slot, we could then tuck in close to shore near Fort Mason and short-tack it from there all the way up to Blackhaller, using the building ebb to our advantage, and thus maintaining our lead. So at the very last second, just as our driver Graham said "tacking!" I called to belay the tack - and that made all the difference. We all climbed back on the rail, and continued on as before, to execute the plan  We were rewarded by arriving at Blackaller well ahead of the rest of the competitors, who chose to tack up the other side of the bay before crossing the slot.

The next decision we faced was if we dared to fly the kite in the strong evening breeze. The wind had started above 20 knots and had only grown stronger as we rounded the mark. But the crew were up for the challenge. We hoisted the kite on a jibe-set maneuver, racing on a port tack towards the leeward mark at Point Knox, even occasionally surfing the Catalina down the faces of the waves behind us. Well ahead when we reached the mark, we were a bit conservative with the spinnaker douse, getting it down a few boatlengths before we rounded. From there, it was a short beat back to the finish line. One boat crossed the line just 15 seconds in front of us, so we didn't get line honors, but we won handily on corrected time, finishing over four minutes ahead of our nearest competitor in our division. Team Phoenix fought with determination, and finished in fourth place, a bit over twelve minutes off the pace.

It was a fun evening and a well-sailed race for Team Kele, and there were smiles and high-fives all around. The victory was an excellent example of what Modern Sailing racers can accomplish when we consistently devote time and effort to the program. As of now, Team Kele is 3rd in the overall rankings for this series of races, and there's a two-way tie for 1st place. We missed being in a three-way tie for first place by a mere 28 seconds when, in the 2nd series race on May 18, Team Phoenix took advantage of a bit of distraction on our boat, skillfully coming from behind and finishing just ahead of us.

Nights like the one we had on May 4th are what it's all about, and I'm convinced it's within Team Kele's grasp to finish on the podium for the series. All we have to do is keep showing up and working together as a team - speed and skill come from consistency and practice. So... go Team Kele! I'll be looking forward to our next race together.

The Start
A big pack of boats and light wind at the start makes things ‘exciting’. We thought we were in a good position right before start. Phoenix went ahead of us but too early - they crossed the line before the start gun and had to return to restart. Kokomo was somewhere in the pack behind us. So all good from our perspective until it wasn’t…  A boat leeward of us tried to squeeze in to make the pin end and forced an aggressive luff maneuver on us. Not nice and didn’t make us happy, but their maneuver was totally legitimate by rules. We had no choice but to react and come up into the wind and into irons. That left us in a precarious position - standing still without any steerage and becoming a big obstruction for the rest of the starting boats. They didn’t like it and especially people who hadn’t seen how the situation had built up probably must have thought that we were idiots.

After awhile that felt much too long, we finally could fall back to our course and continue the start. Overall, we were still ahead of Phoenix and Kokomo.

The General Problem
The reason why racers hate/love the Corinthian races is that many times there is only light wind at the start as its blocked by the Belvedere Peninsula. Also, there can be a challenging current that can make it hard to start or finish in that area.

At the same time only half a mile away in front of Angel Island, the typical SF Bay summer afternoon breeze is blowing like crazy at 25+ knots. The contrast between the wind strength at these two areas presents a big challenge regarding the right amount of sail area and sail trim. So first, it is a challenge to get the boat going in the right direction at all, and then when you finally catch the breeze, it hits you seconds later with such force that you wished you had less sail up. Reefing will usually take too long, so instead you try to hang in and somehow make it to the weather mark without broaching.

On Course
Phoenix was first to get going, caught the breeze, and held steady in front of us for the next half hour, but we managed keep the distance close. Kokomo was behind us.

Finally on the last long downwind leg to finish, we were able to overtake Phoenix.

Confusion at the Finish
Corinthian Yacht Club brings out an inflatable offset buoy called ‘elephant rock’ about 200 to 300 yards east of the finishing line as the last mark to round. This will make boats always finish orderly and upwind from the same side as they started. And, it’s easy to watch the crossings from the race deck at the yacht club and take the finishing times.
Same problem as at the start, this area sometimes doesn’t get much wind and if the current is a flood, it is very hard to make it back to the finish line. These last 200 yards can take what feels like forever.

That evening had exactly these conditions and boats were struggling to finish. Overall, we were the last fleet to finish and also the last boats. At some point the race committee must have made the decision to shorten the race course to get it over with. We were in the middle of our struggle to make it to the original finish line when they announced something on the radio that to our surprise we were already counted as finished to a shortened course.

It’s still not clear exactly where that new finish line was. When I later checked the results, Phoenix, who was 4 boat length behind us rounding elephant rock must have crossed that virtual line earlier because because they had tacked while we continued on port. I think none of the two boats were aware of that fact… a bit of a bummer from our perspective. “Close but no cigar.”

Congrats to Phoenix for winning the internal competition between the three MSC boats. Kokomo was also not far behind, and by the time the boats had all returned to the Modern Sailing dock, the excited exchange of stories between the crew started how everybody had experienced their struggle with the challenges of the race and who had actually finished first because results were only published online a bit later…