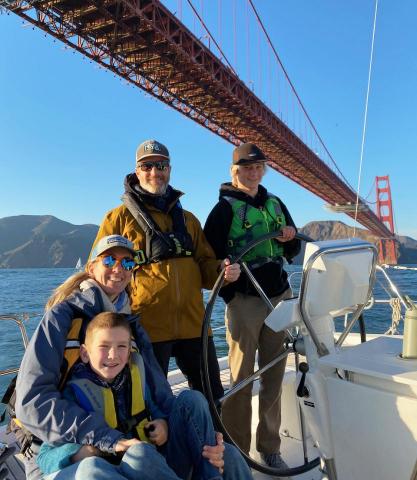 Sean Crawford began dreaming of sailing since he lived on St. John of the US Virgin Islands in the early 1990s. Over the years, other priorities always won out, until one day in June 2020 when he was sea kayaking on Tomales Bay. Inspired by the experience of being out in nature and on the water, it occured to him that it was finally time to begin making those long-held sailing dreams come true. So he went home, compared some sailing schools online, and then signed up for courses at Modern Sailing.

Sean began with a Skippered Sail in July, and since August, has completed ASA courses 101 through 104, ASA 114, Cruising Catamaran, ASA 118, Docking Endorsement, and the Night Sailing, Mastering Sail Trim, and Heavy Weather Sailing Clinics. He also joined MSC's Farallones Day Trip and the Discover San Francisco Bay by Sail: Local Destinations and Beyond webinar. In addition to his classes with Modern Sailing, in October, he sailed an intensive heavy weather training passage from Maryland to Bermuda with John Kretschmer.

Through his education at Modern Sailing, Sean has learned a key principle that every one of his instructors has suggested at some point: no matter our experience level, we can always learn something new every time we sail.

There are two things that Sean loves most about sailing. He says, "One is simply the feeling of it. The other is that I’m an explorer. Sailing allows me to explore the waterways, the life within them, and the lands they connect, under the power of the wind, with the side-benefit having my house with me wherever I go."

Sean and his family, which includes his wife, two boys (ages 6 and 13), and two small dogs, are currently searching for a bluewater boat in the 42 to 50-foot size range to carry them on to bigger adventures. They are undecided whether they'd like to own a catamaran or a monohull. Either way, they plan to start out as "commuter cruisers," splitting their time between their home in Woodacre and cruising expeditions aboard their future floating home. Where they go first will depend on where they buy their boat, but high on their destination wish list are the Caribbean, the Azores, Northern Europe, the Mediterranean, the Canary Islands, Mexico, Hawaii, and the Pacific Northwest.

Since that inspiring day in June paddling a sea kayak on Tomales Bay, Sean has been thoroughly committed to acquiring the skills and experience he needs to make his sailing dreams a reality. His progress from dreaming to doing has been rapid and steady and he is now ready to cast off for some grand adventures. We at Modern Sailing are thrilled for Sean and his family, and we look forward to following their sailing journeys in the years to come.

Do you dream of sailing adventures near or far? Modern Sailing School & Club can help you get prepared to go with confidence. Your journey can begin with an email or a phone call to our friendly office at (415) 331-8250.