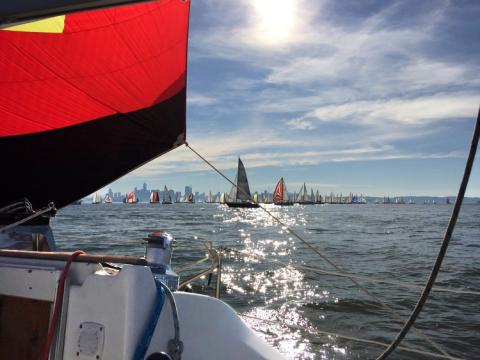 Every year in late January, the Singlehanded Sailing Society presents one of the biggest sailboat races west of the Mississippi River: the Three Bridge Fiasco. Race crews are limited to single- or double-handers and often, more than 300 boats sign up to participate.

The start and finish line is in front of Golden Gate Yacht Club. The course rounds Blackaller Buoy by the Golden Gate Bridge, Yerba Buena Island/Treasure Island near the Bay Bridge, and Red Rock, which is near the Richmond/San Rafael Bridge. These marks can be rounded in any order and any direction, adding the “fiasco” aspect to this sensational event. Winter's typically light winds and the Bay's strong currents make this the favorite yachting event of the year for many Bay Area sailors, including team members at Modern Sailing and our partner club, Inspire Sailing.

This year, our CEO Leigh Hunt is making the Three Bridge Fiasco even more fun with two bottles of fine wine promised to the team who places the highest among them.

Members are not able to participate in this race on MSC charter yachts, but we still highly recommend going out on the Bay on January 29th to witness the colorful spectacle and cheer on the crews. See for yourselves why this race is called the Three Bridge Fiasco: hundreds of boats sailing in all directions (or attempting to sail!) to round the marks and finish with the best possible time. Members can book a boat online or join Saturday's Club Sail on Attitude Adjustment.

In the table below, you'll find information about the MSC and Inspire Sailing teams competing in this year's Fiasco. Their sail numbers are also provided to help you more easily spot their boats among the fray.

Message from Leigh Hunt, CEO and 3B Fiasco Fanatic

The Three Bridge Fiasco is my favorite event on the SF Bay racing calendar. It’s a great kick-start to the sailing season, and I love the double-handed format because it demands a lot out of both crew members. 2022 will be my seventh time competing. Like my last attempt in 2020, I’ll be sailing Phoenix out of the Modern Sailing fleet. I’m doing a double-handed entry with Jimmie Marquez, a friend who is also one of our skippers and race coaches. 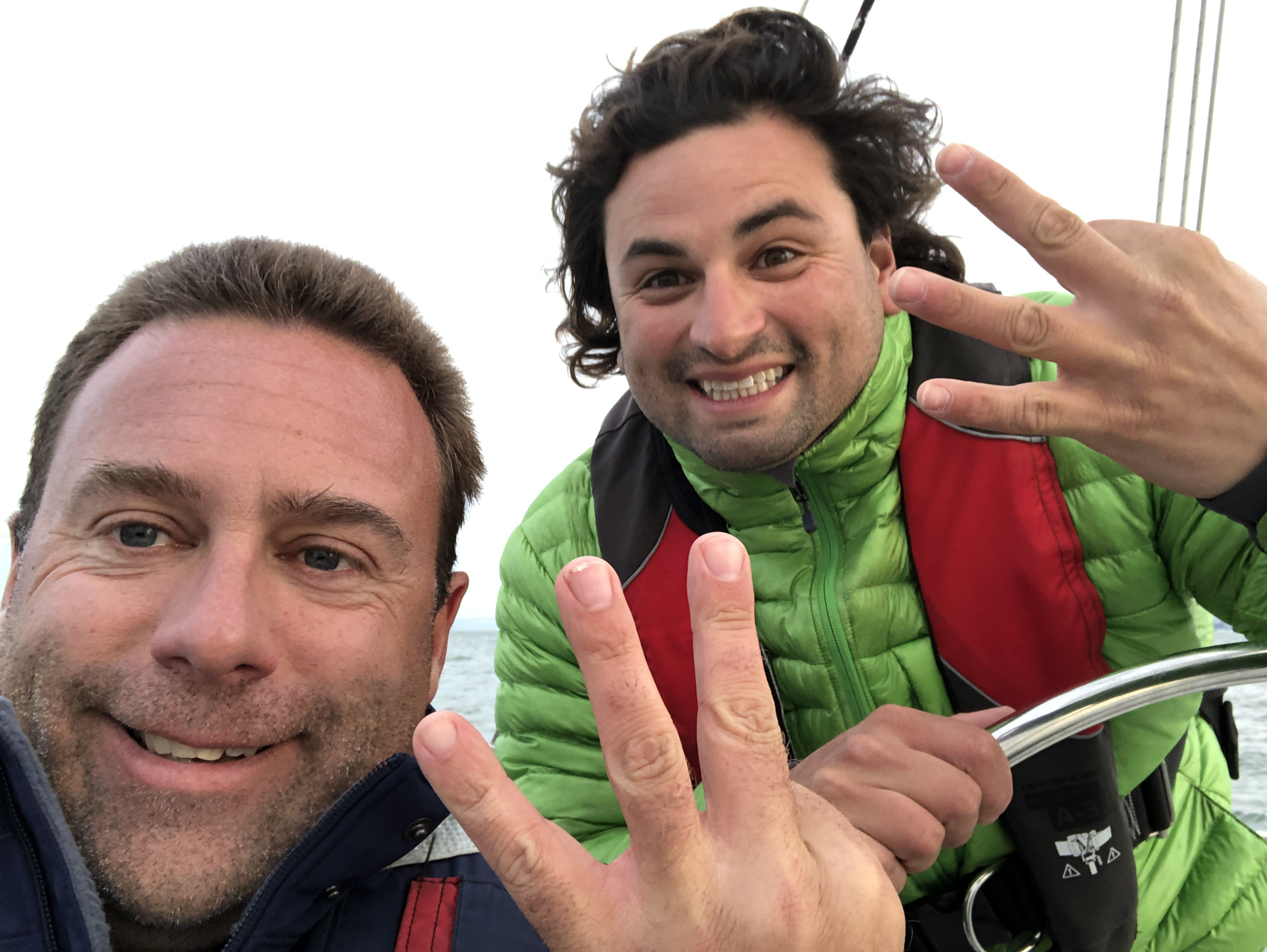 Leigh and Jimmie have sailed together in several Three Bridge Fiascos over the years.

The Three Bridge race course traverses the whole main Bay, and January weather often presents a wide variety of challenging conditions. Light winds often barely push the boat enough to overcome the tide which always seems to be flowing in the opposite direction from where you want to go! Sometimes you are sailing briskly focusing on your sail trim, and other times you are drifting so slowly you are watching your SOG to see if you are making any forward progress. It’s one of the few races in the year where your anchor can play a strategic role!

The biggest strategy decision to be made for this race is usually the order you attempt to round the three marks. We generally use as much weather and tides forecast data as possible to plan our intended route, then make the final assessment out on the course. A clockwise course from Blackaller to Red Rock and then TI is often our preferred path, but we’ll see what the weather presents. The wrong call can have you drifting out under the GG Bridge, sitting at anchor off Crissy Field, or stalled and drifting aimlessly just short of Red Rock. As a less experienced racer it is always a good idea to watch where the majority of boats are headed. You may not win by following the pack, but for many of us a victory in the Three Bridge is finishing before the 7:00 PM time limit!

My personal essential equipment for this race is our stern rail-mounted BBQ grill, and we’re not afraid to use it!

We’ll see you out there!" 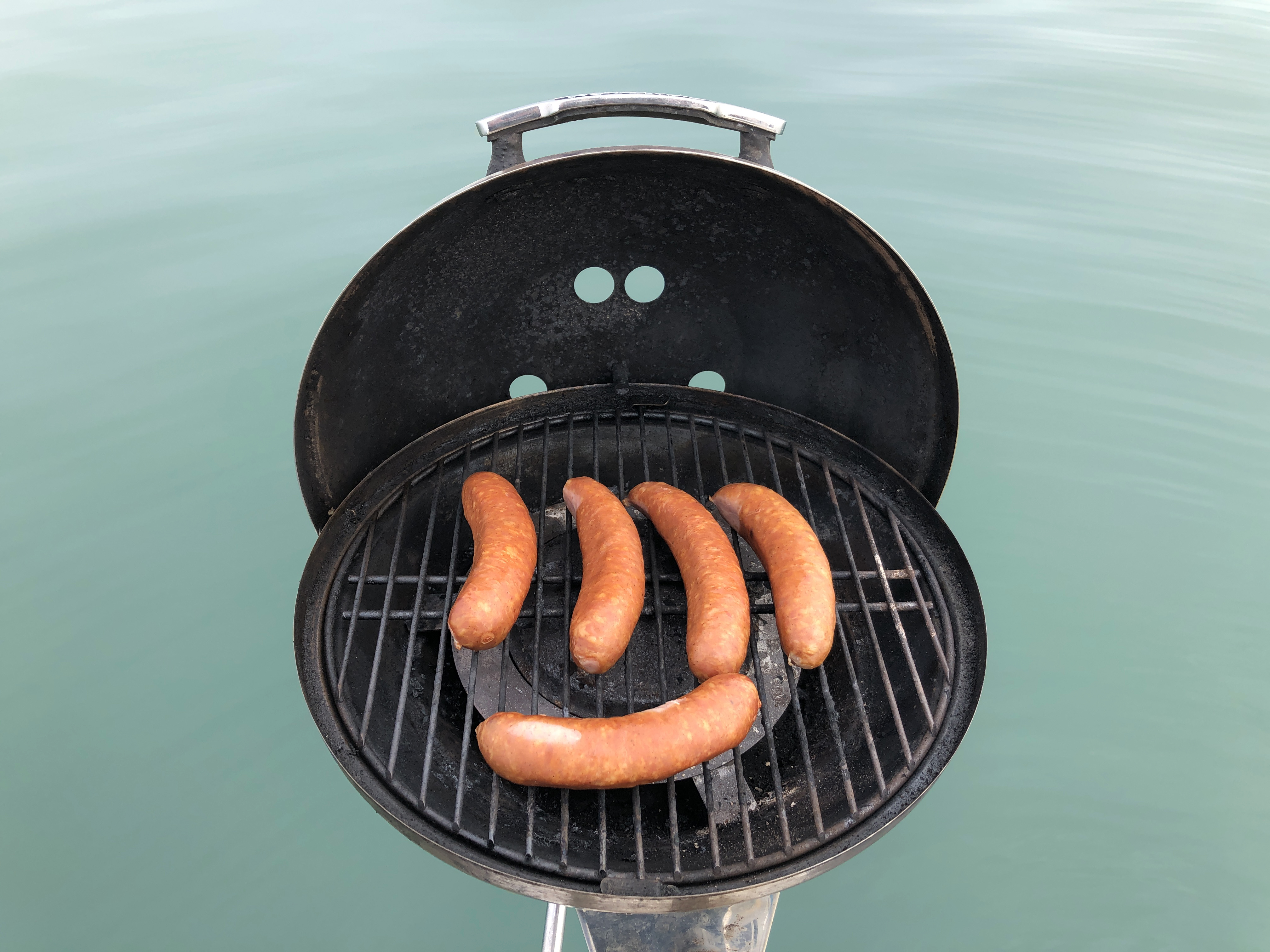 To sample the spectacle, watch this fun little YouTube video made from photos and film that Leigh captured during the 2020 Fiasco.