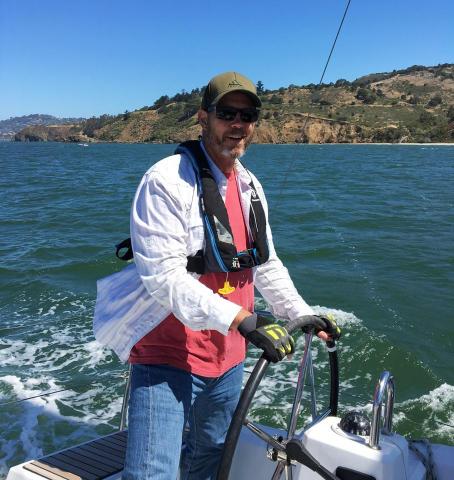 Scott Jefferis has played in the ocean for as long as he can remember, so sailing seemed to be a natural choice for when the wind is too high for surfing. He first sailed on friends' Hobie Cats while in high school in Kailua, Hawaii. In college, Scott sailed 19' and 20' sloops on Mission Bay of San Diego. Then life got in the way, and while he continued to enjoy ocean surfing, sailing became a thing of the past - though not forgotten.

In February 2018, Scott joined Modern Sailing and rediscovered the joy of playing in the wind and water. Since then, he has completed ASA sailing courses 101 through 104, ASA 118, Docking Endorsement, and ASA 114, Cruising Catamaran. He has also participated in MSC's Recreational Race Clinic, Mastering Asymmetical Spinnaker for Cruisers Clinic, the Mastering Sail Trim Clinic, and a Farallones Day Trip.

"Being a part of Modern Sailing has given me the confidence to skipper a boat, instead of simply pulling lines when told to," he says. Along with some Club Sails and bareboat charters, Scott is now well-prepared for an epic sailing adventure to come.

In November 2020, Scott signed his contract to join the 2022-2023 Clipper Round the World Yacht Race. Rather than crewing a single leg of the race, he will participate in the complete 11-month, 40,000 nautical mile circumnavigation. His race will include three Atlantic crossings, a Pacific crossing, and daring the notorious Southern Ocean.

After the Clipper race, Scott plans either buy a boat of his and sail to exotic lands, or, "I will be so sick of the sea I will never sail again. I'm certainly hoping for the former!"

Modern Sailing extends Scott a huge congratulations for joining the 2022-2023 Clipper Round the World Yacht Race. We are honored to have played a part in helping him to prepare for this exciting adventure, and look forward to following his future journeys!

Do you dream of sailing adventures near or far? We can help you acquire the skills and experience that you'll need to get out there with confidence. Your journey can begin with an email or a phone call to our friendly office at (415) 331-8250.