The Hargreaves Sail from Hawaii to San Francisco 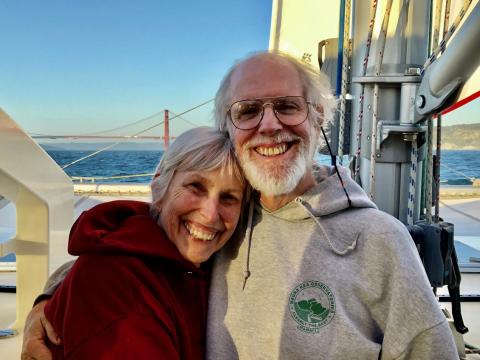 Modern Sailing students and club members Ken and Linda Hargreaves recently achieved their first major ocean crossing as crew on the delivery of a 55’ Dix-Harvey catamaran from Hawaii to San Francisco Bay. By frequently taking classes, joining Club Sails, chartering, racing, and participating in an MSC Global Destinations flotilla, Ken and Linda's sailing skills have come far in only a few short years. With a Pacific Ocean crossing now under their belts, they are well on their way towards their ultimate goal of sailing a catamaran of their own to the South Pacific.

On Wednesday, May 6 at 8:53 PM, Ken, Linda, skipper, and a fourth crew member cast the big cat off her mooring in Kihee Boat Harbor and headed southwest around the tip of Oahu. Linda and the skipper soon went down with seasickness, leaving the boat in Ken and the fourth crew member's capable hands. On the skipper's directive, the first three days of their 15-day journey were spent tacking back and forth into the wind along an east-northeast rhumb line, and very little headway was made.

By Saturday morning, things took a turn for the better. After spending 2 ½ days sailing 479 nautical miles to gain only 158 miles of headway, the skipper decided to change course and head north to where Ken's weather study predicted more favorable wind. Linda found her sea legs and prepared her first ocean dinner in 7 to 9-foot swells. At sunset, a cloudless horizon yielded the auspicious green flash phenomenon. “More of a green blip than a green flash,” Ken and Linda laughingly recalled. "Not as dramatic as you'd think."

Alone on night watch for the first time, Linda looked out into the darkness and down at all the instruments and felt a zap of terror. She wondered what in the world she was doing out there on the ocean - and if she might be crazy. But after making it through her three-hour watch, Linda did not doubt herself again and even learned to love night watches. The planets and constellations became like familiar friends to greet her at the beginning of each watch and to keep her company as they kept her orientation.

Life on the Ocean

The crew quickly fell into the rhythm of life on the ocean. Ken studied weather maps and forecasts, took routine sightings with his sextant, and exercised the celestial navigation skills he learned in ASA 107 with Cpt Stan Lander. Linda corresponded daily via email with their daughter, read books, and journalled. Learning and practicing knots kept them occupied for hours. They cooked, cleaned, rested, and tended to the sails as needed. The boat became a floating oasis, a peaceful, simple existence buffered by miles of ocean from the rest of the world’s cares. There were no COVID conversations during the crossing, which was a blessed reprieve.

"As adventurous and inspiring as crossing an ocean might seem," says Ken, "mostly we just sat there."

Of course, no ocean journey would be complete without a few boat problems. A torn headsail, a snapped outhaul, the scare of finding floating floorboards, and the relief of realizing it’s a fresh water leak and not a hole in the boat, added some variety to the day. The crew capably managed these problems as they came up.

By Tuesday, May 12, they had traveled 992.7 nautical miles and were only 435 miles from where they started. Linda wrote of that day, “We put out a couple fishing lines, tied one to the boat and had a pole for the other. The ocean was so calm…like beautiful blue glass in all directions with a few clouds on the horizon. Once you are away from land, the blue of the ocean is just incredible. It really is a royal blue, not anything like we are used to seeing near the coast.”

Later that afternoon, Linda reeled in a 4’ mahi mahi. They enjoyed their first fresh fish dinner surrounded by those beautiful glassy blue seas as far as they could see. Even Ken, who does not like fish, liked the mahi mahi because it did not taste like fish! After dinner they spent time stargazing and feeling so lucky to be able to enjoy such profound beauty and serenity at sea. To top it off, the next day, they were treated to watching a large pod of dolphins cleverly hunting with bubble nets. At the end of 5 full days of sailing, they had travelled 1,087.3 nautical miles with 1,702 miles to go.

Wind and swells had built over the predawn hours of Thursday, May 14. Around 5:00 AM, a wave hit the side of the hull, squirting seawater through the latched hatch all the way across the cabin to the far wall. By daylight, they could see the size of the swells, some cresting to 12 feet. The boat picked up speed down the face of the swells, at one time surfing at over 21 knots! About 5 minutes of rain gave the boat a good washing off, and by mid-day, things had calmed down. Now averaging over 200 miles per day with an average speed of about 10 knots, after 8 days, they had sailed 1,487 nautical miles and had 1,318 miles to go (as the crow flies).

On Saturday, May 16, still three days from the coast, the first ship they’d seen in many days appeared on AIS. Two-hundred and eighty nautical miles outside the Golden Gate Bridge, watching ships pop up on AIS became a form of entertainment and another way to pass the time. Knowing they were getting close, the crew buzzed with restless anticipation. Linda's last night watch on May 20 felt bittersweet. The sky was overcast, but Jupiter and Saturn poked through for a brief hello. Ken and Linda were excited to be so close to home, yet wistful about the journey ending.

A Sense of Accomplishment

By midday Thursday, the sky cleared and the sun came out. The swells were higher than the catamaran's coach roof, great big gray walls of water. Sighting the Golden Gate Bridge at 6:37 PM, Ken and Linda were filled with a sense of accomplishment.

Said Linda, "The sun was setting behind us, shining on the Golden Gate Bridge and giving it a brilliance we had not seen before. Even with all the times Ken and I had sailed under the  Bridge, it never looked so spectacular. Fourteen days, 21 hours 15 minutes and 2,832.3 nautical miles. WE MADE IT! And we would do it again in a heartbeat!"

Ken and Linda are more inspired than ever to continue pursuing their sailing ambitions. For now, their worldwide search for their ideal catamaran goes on, albiet hampered by coronavirus travel restrictions.

The Hargreaves wish to extend special thanks to MSC CEO Leigh Hunt for his help setting up their Iridium GO, and to fellow club member Tim Welch for relaying wind and tidal information by email that substantially aided and informed their approach into SF Bay.

Are you as inspired by the Hargreaves as we are? At Modern Sailing, helping sailors like the Hargreaves achieve their sailing dreams is what we live for! To learn more, call our office at (415) 331-8250 or email us.

Home » The Hargreaves Sail from Hawaii to San Francisco