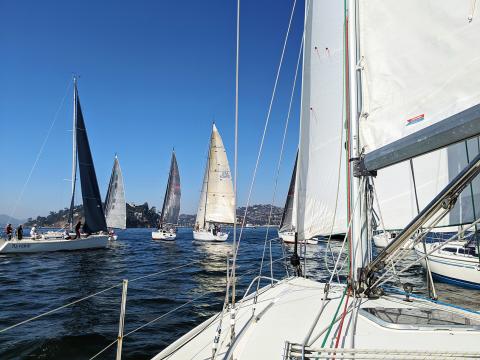 The fall racing season is under way!

Every race is a surprise with varying weather, currents, courses, and competitors. Our teams faced several challenges in the first two races this season, but every race is an opportunity to learn and hone skills, tactics, and teamwork.

With these race reports, find out how MSC's season is going so far.

On Halloween, MSC's Catalina 320 Phoenix was crewed by Anne T., Michael M., Ken M. and coach Cpt. Kira Maixner. The race began with very light winds and an awkward start. At the start line, Phoenix stalled and was passed by the entire regatta, but the team quickly rallied and gained ground over some of their competitors.

Rounding the second mark at the first downwind leg was a tense moment for Team Phoenix, as nearly two dozen boats clumped together at the mark with only a few feet of space between them. Fighting a strong current, the yachts wrangled for an advantageous position while doing their best to avoid collision. A large wake from a passing ship tossed Phoenix towards the mark, but they managed to miss it by about an inch.

Meanwhile, the wind began to pick up, enabling Phoenix to plough through and leave several yachts in her wake. In spite of course changes during the race that lead to some confusion, the team stayed on the correct course. With the challenge of rounding the marks behind them and winds gusting to over 20 knots, the crew enjoyed an exhilarating sail down the final leg to a respectable fifth place finish.

Racers Jim S., Michael M., Ken M. and coach Cpt. Stephan Sonnenschein sailed our Catalina 320 Kele in the November 14th CYC Fall Series regatta. The racers received a mixed blessing of glorious sunshine and very light winds - so light that the CYC race committee delayed the start by about an hour to wait for the breezes to fill in. Like Phoenix in the October 31 race, Kele and the other vessels in her class were initially assigned a longer course. The race felt even longer due a strong ebb current that slowed everyone's progress on the downwind legs. 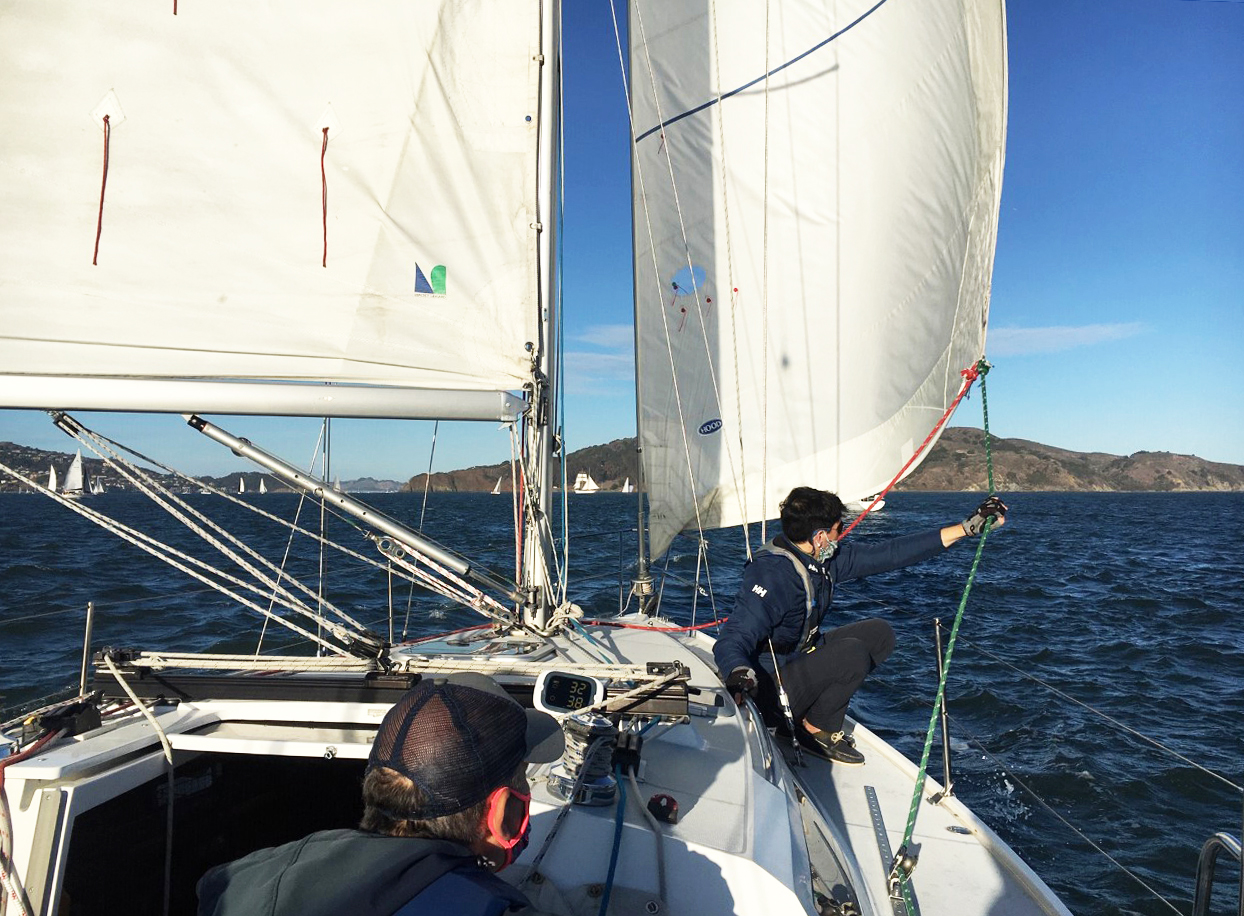 Stephan reports that the team maneuvered Kele smoothly around the marks while other boats struggled in the strong current. Team Kele experienced the same confusion as Team Phoenix about course changes and there were some doubts as to whether the team had finished properly. The results revealed that Team Kele did indeed finish, placing seventh in her class.

Overall, the team enjoyed beautiful conditions sailing together and an unexpected close encounter with the spectacular tall ship Matthew Turner.

Racing with a view of the Matthew Turner and the Golden Gate Bridge.jpg 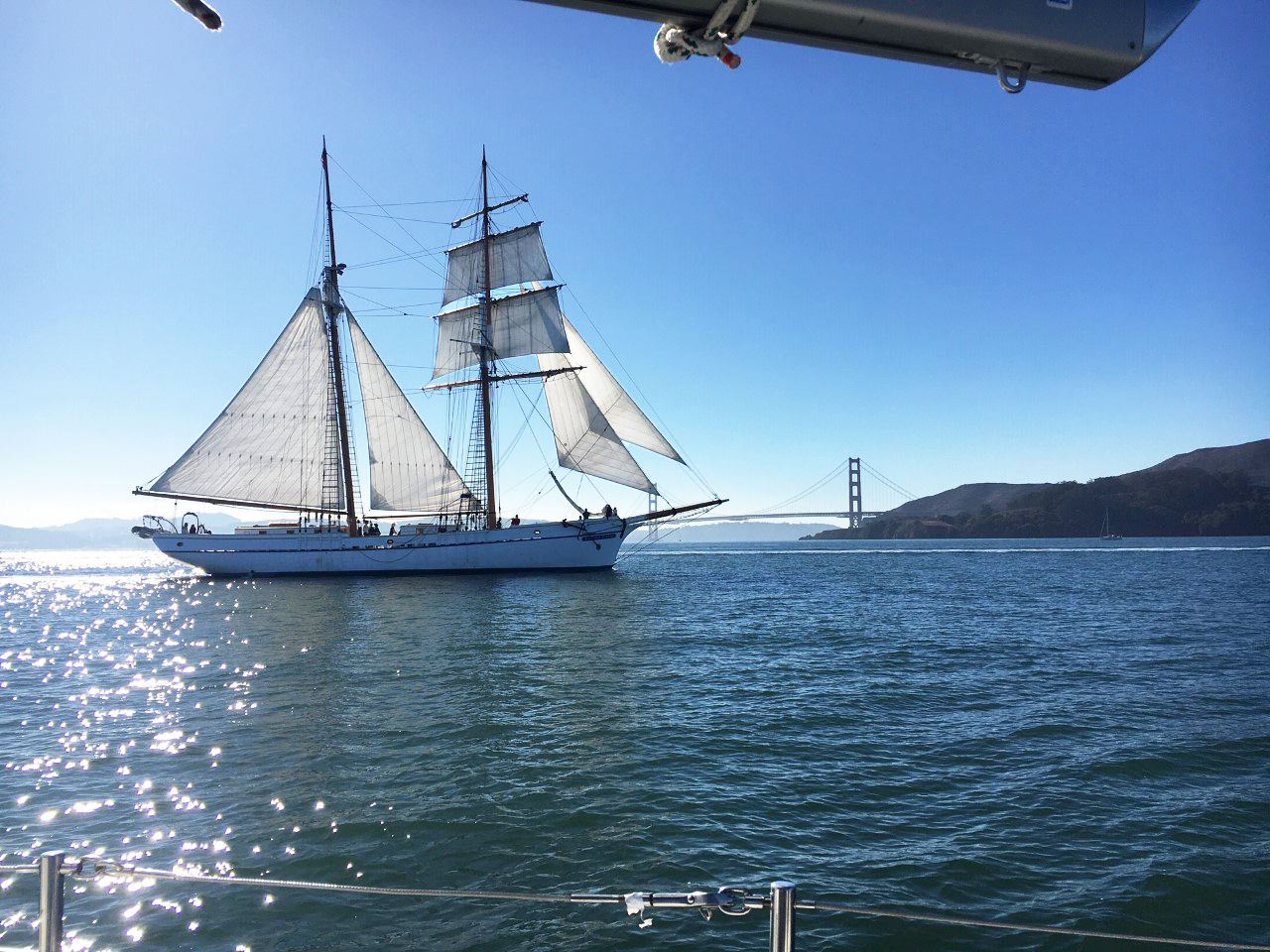 Special thanks to Captain Kira Maixner and racer Jim S. for sharing the photos with us!

Interested in sailboat racing on San Francisco Bay? Racing is within your reach! Learn how you can join in all the fun of yacht club racing with our Recreational Race Program.