Mark Jordan is one of Modern Sailing and Inspire Sailing's outstanding instructors and is also a race coach. This summer, he participated in the 2022 Pacific Cup Race, double-handing his Hanse 342 Twelve-Winded Sky with crew member Randy Leasure. Read in Mark's own words about his dramatic experience racing across the Pacific Ocean and the intense highs, lows, and learnings that he encountered along the way.

First of all, I want to thank everyone who supported us in so many ways. As I've said many times, even though it was just me and Randy out on the water, we could not have done this without all of the help we got from our shore support team. I'll have a more complete list at the end of this message, but right up front, I want to call particular attention to Maryann, Dani, and my boat neighbor Don A, who volunteered so much time and effort to help us. You are the best! I'm grateful and humbled by your indispensable contributions. Thank you from the bottom of my heart.

Now on to my race experience. If I had to sum it up in one word, I'd say "intense." I've written about how I felt the race really began months ago when I started all the prep work. But I can report now that the level of intensity went way up during the race itself. Of course, racing means you are always trying to get the best performance out of the boat and out of yourself. When I race, I push myself hard. But I've never raced for weeks at a time before, and I learned some hard lessons about the toll that takes on the boat and on the crew - especially when double-handing.

Those who followed our progress on the tracker saw that we went quite far south - well past the Mexican border - before we turned westward. We did this to avoid the light winds of the high pressure system that was parked in the Pacific between San Francisco and Kaneohe Bay, but it also meant that we sailed a lot of extra miles. So after the first 5 or 6 days, once we did start to get some favorable winds, I think I tried to do too much in an attempt to make up time.

I didn't do a great job of pacing for the marathon. For example, I would call for keeping the spinnaker up too long, often at night. There's nothing fundamentally wrong with flying the kite at night, but for context, you should know that nighttime is when the squalls and the strongest winds occur... and they come on quick. So when they do, then all of a sudden you have 25-30+ knots hitting you like a bomb, with rain, ocean swell, and wind waves. You lose your references in the dark with no way to tell the water and the sky apart... And especially with only two crew, you really have a fire drill to get the kite down. And woe to you if you really screw up and carry it so long that it gets wrapped... then it feels like you're fighting the Kraken, and you're exhausted and demoralized and soaked when you finally do get it down (hopefully in one piece) and then you realize you still have weeks of sailing ahead of you. Yes, those moments were hard, and I admit that they led to some serious gut checks. 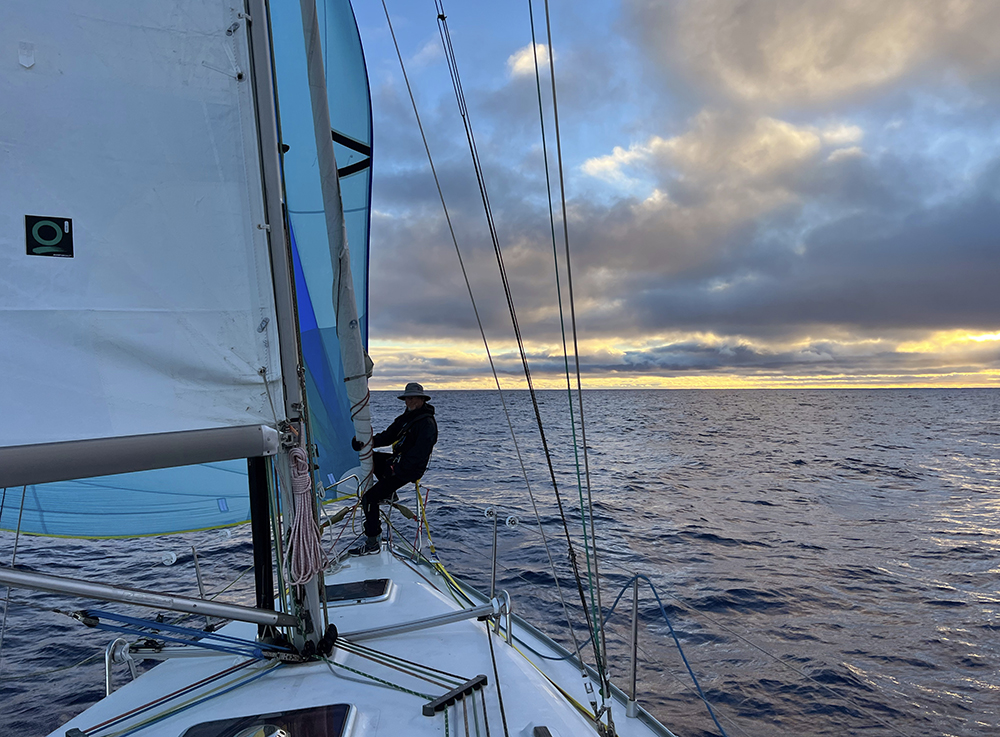 But intensity isn't just limited to the difficult moments... it applies to the positive things too. One thing that surprised me was how intense every emotion was, positive or negative. The highs were so high, like when we'd fix a boat problem that had been nagging at us, or when we would have a good day of sailing and put a lot of miles under the keel. Those moments felt incredible, and I always felt like we were on top of the world and we could win the whole thing when they would occur. Or the natural beauty of the ocean. Sunsets, sunrises, rainbows, even the color of the water itself (an incredible, iridescent, deep blue that I just don't seem to have a good word for) were indescribably beautiful and made you feel happy to be alive and lucky to be there.

As the race went on, we learned more about how to get Twelve-Winded Sky downwind in a way that was a good balance between max performance and preserving the boat and crew energy.

There were a lot of firsts for me in this race. For example, this was the first time I've had a spinnaker pole to use with my asymmetrical spinnaker, so it took some experimentation to figure out how to use it effectively in the different conditions - i.e. when we should pole out and sail deep angles and when we should just ditch the pole and fly it at hotter angles from the sprit. We also learned that during the really squally nights, for this crew, it was overall faster to just take the kite down early and pole out a genoa, which led to fewer fire drills and thus more steady (if less exciting) progress. It turns out that ironically, sometimes it's actually faster to slow the boat down.

By the end of the race, all the hard lessons led to us getting a pretty good routine going, but that learning had come at great cost to our overall VMG, and thus our result in the race.

Nonetheless, I am super proud of my team's accomplishment of finishing this race. Those of you who know me a little bit, especially those who have raced with or against me, can probably guess how I felt about coming in last in our division. But what might not be obvious is that I am personally at peace with it, because I know I left it all out there on the race course. I sailed as hard as I knew how, I became a better sailor and racer, I had experiences that not many people in the world ever get to have, and I'd like to think that I grew a little bit as a person.  And through all of that, we managed to keep from breaking the boat or getting seriously injured. That's a win in my book.

What comes next? Well... I'd like to apply all the lessons that the ocean taught me... 2024? But will I continue my tendencies toward being a glutton for punishment and go double-handed again? Nope! Glad we did it. Couldn't have done it without all the innumerable contributions of knowledge, time, materials, and support from Randy. But Jim Quanci was right... double-handing is the hardest racing there is. Proud to say we did it, but I probably will go full crew next time.

Here is the more complete list of people I want to thank. Apologies in advance, because I'm sure I will forget someone, and this is in no particular order, but I at least want to do my best to show my gratitude to the people who helped so much with this effort. From helping with wrestling sails and rigging to receiving packages to holding tools to giving rides, words of encouragement, etc... it was all necessary and appreciated help!

Thank you so much!