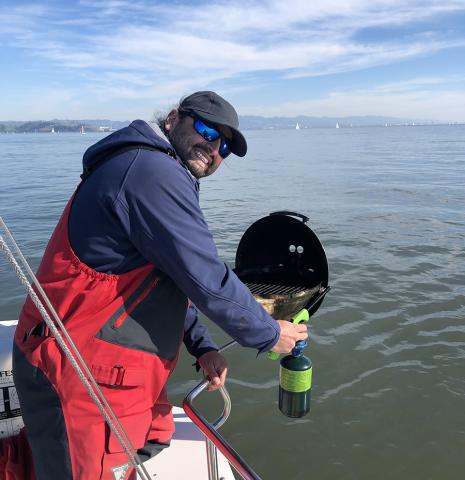 As the only team among them to cross the finish line before the 7:00 PM cut-off, Katie Cornetta and crew member David Janinis will receive the two bottles of fine wine promised by our CEO Leigh Hunt!

See photos from the race day and read about their race experiences, in their own words.

The results are in for the Three Bridge Fiasco … 60 out of 303 registrants finished the race! And (not surprisingly) Team Phoenix was not one of them. The day’s forecast had me heading out on the race course wondering if a DNF was a forgone conclusion, but a fresh breeze at the start solidified our clockwise route choice and made for a quick rounding at Blackhaller. The breeze held as we headed north via the south side of Angel island. The optimism from the lovely morning sail didn’t last too long, our forward momentum dropped as the winds lessened and the tide built. The tidal relief in the shallows off the Richmond shore didn’t last long, and eventually we went from slipping sideways to fully going backwards. At that point the only choose was to break out the two most essential pieces of racing gear, the anchor and the BBQ grill! After lunch we sat waiting (in vain) for the winds to build. By 3:30 we knew that finishing was no longer a possibility so we called it a day. I am in awe of Kathleen Cornetta of Inspire Sailing who actually finished the race on her Express 27! Congrats to Katie, Phil Strause, Kira Maixner, John Squire (owner of Andiamo in the MSC Gold Fleet), Mark Jordan, and all the other racers who were out there trying the defy physics!

I has so much fun with my crew, Joe Proctor, MSC's Boatswain, a.k.a. Fleet Foreman, during this year's 3BF. It was also my first race aboard my new to me, S2, Samba. Unfortunately we had some issues checking in and got a DNS! I would be more upset about it if we’d managed a finish, but instead we sailed for 6 hours, covered 15.5 nautical miles (total course lengh being 21nm) and didn’t round even one “island.” We discovered that there was more wind than predicted, and tried to get past the Bay Bridge first but the current got the best of us. We abandoned our planned route for a brisk zip over to try and round Red Rock, but alas, the current was too strong and we never got there. On the bright side, we did have a nice BBQ underway and the sailing that we did do was pretty nice. I am so proud of some of the tricky' "no wind, strong ebb" maneuvers we executed to get away from the shore of Yerba Buena Island. Joe and I had a great time and I am so pleased to discover how well Samba sails in light winds!

I sailed and skippered my first Three Bridge Fiasco. What a wonderful and wacky race. Such a fun SF Bay experience!

Double and single-handed boats only, in a pursuit race format with 300+ entries! Go to each mark in whichever order you choose. We sailed for that dang Red Rock for hours and hours. It would get larger, then smaller, larger, then smaller again. The wind shifted and waned. The ebb stayed consistently strong.

There just comes a point when you do the math and realize that you can't finish before the 7pm cut-off time even if you went the fastest the boat can go for the remainder of the race. So, many of us retired. Only 20% of the boats finished. But I sure had an unforgettable day!

Thanks to @almoffat and @gserafini for the pics and for being my rad parter! Two bonuses from our evening practice sail. (It's a borrowed boat, a J/36.)

After some deliberation back and forth, my crew and I decided to go Blackaller to Red Rock to Treasure Island. We knew there was a rocking ebb with the max at 1pm, so we knew it would be a mad dash to make it around Red Rock.

When we got to the start, the breeze was a consistent 10 kt northerly, so we checked Blackaller off the list because the breeze was forecast to die in the afternoon. The breeze was staying consistent and the ebb wasn't hurting us too badly until we got to Red Rock. When the wind started dying, the ebb was really starting to ramp up. Motorcycle Irene, another Express 27 we had been crossing tacks with on our way to Red Rock, just barely snuck around the island by getting really close to the Rock to get tide relief and went on to win the entire race. She was followed by Bombora who tried the same thing and ended up hard aground for the rest of the day. We were close behind and tried getting up next to the island for a couple tacks but bailed out as the wind died.

After 34 tacks and only minimal progress, we eventually we saw an opportunity with a little breeze line along the Richmond shoreline and short-tacked in the shallows until we were well north of the Richmond Bridge.  Then we set the kite and still barely got around Red Rock.  The rest of the day was pretty smooth sailing in light air, and we finished right after sunset with a nice 10 kt seabreeze.

Modern Sailing instructor Mark Jordan could not be reached for comment. Official race results demonstrate that he and skipper Gilles Combrisson were among the majority who did not finish.